"May the dogs of hell be as kind to you as they have been to me."

Ryan Marshall Knox, more commonly known as Aaron Alexander Spyker, Phantom during his earlier years, and initially as Zinoviy Ozpin, was one of three founding members of the international private military company known as Cerberus Contracting. Due to a lengthy record against the United Nations, they consider him the world's most wanted man, and advertise him as a highly dangerous individual. Succeeding the company's original Director and his long time friend, Rook Bowman, Knox became Cerberus' second acting head. Shortly after his ascension to Director in 2023, Aaron disappeared for nearly two years, leaving the company in the service of his sister, Melina Ozpin. Upon his return in 2025, the operators gladly accepted him once more as the Director.

However, revealing that the entire disappearance of his old friend was but a ploy to test the loyalty of the organization's members, Aaron returned to his rightful place as Deputy Director while Bowman once again accepted his position as the Director.

Recent developments have compromised the integrity of Aaron and Rook's mission, causing the former to rise to the position of Director once more. With the organization left completely under his control, he leads Cerberus Contracting into a new direction.

While leaving Cerberus Contracting to deal with the Blood Plague, a deadly virus spreading through the streets of Rome, Italy like wildfire, with his genetic clone Marshall Maxwell in charge of the operation, Aaron Spyker worked to reveal the existence of Isokrates, a foreign sovereign nation based in the mid-Atlantic. He resigned the position of Director, rising to the rank of Sovereign, and promoted Maxwell to Director of the Isokrates military.

Aaron Spyker stands tall at around six feet with a medium build and overall average physique. His eyes are a bland grey color, the reason for which being unknown. Atop his head is short black, greying hair, though the man is only forty-eight years old. Years of stressful thoughts and constant struggles have brought his overall appearance to that of a much older man. He also has a full well-trimmed beard, though he does occasionally shave it completely.

Aaron Spyker has always been a scarred man; following his return to Cerberus as the Director, his physical health had visibly deteriorated. Seemingly irreversible nerve damage curses his right leg, making it a nearly impossible task to walk without the assistance of a cane, or, in some cases, adrenaline-inducing stimulants which temporarily restore functionality to the leg. In addition, Director Spyker's left eye has been completely ripped to shreds. In the absence of near-immediate medical attention, it became unlikely that the socket would ever hold a fully functioning eye ever again, though he has refused, on multiple occasions, to undergo surgery which would implement a cybernetic eye in its place. To that end, Ryan dons a simple black eye-cover which hides the empty socket.

He is generally seen wearing a suit and tie -- the style he had picked up from his long-time friend, Rook Bowman -- though he has been known to wear more casual jackets and such when the suit is not necessary. He has a trench coat that he wears on occasion.

He has a deep, raspy voice that doesn't seem to change much, even while expressing emotion. It is extremely professional.

"Do not judge me by my methods, but rather by what I seek to accomplish."

Aaron Spyker is a no-bullshit and little to no tolerance kind of guy. Very firm when he needs to be, he can be just as stubborn as Rook Bowman. He sees much of the world around him as a hellhole, and, despite his tough attitude, does truly wish to make a change, though those changes may not be the kind everybody agrees with. He understands that people without a strong leader will create chaos, and thus become uncontrollable.

He believes firmly in the idea of the ends justifying the means. He is willing to do almost anything to solve many problems, especially those that are world-changing. He will not hesitate to sacrifice his own people in the event it is for the greater good, though it will not necessarily be his first option as he does understand the usefulness of people.

He is very protective of those close to him, namely his daughter and his secret family in Australia. He will go to great lengths to ensure their utmost safety and secrecy, and to ensure their involvement in his organization is bare minimal. In the best case scenario, he keeps them completely uninvolved and uninformed, as he believes it is best for them. He will not hesitate to lie to them if he deems it absolutely necessary in order to keep them safe and unharmed.

Born to Oscar and Gwenda Ozpin while on a trip to the United States of America in 1976, Zinoviy was quickly put up for adoption in the states due to unready parents. Soon thereafter, the orphaned infant was picked up by Sandra and Alexander Knox, who would go on to name him Ryan. Growing up without the knowledge of his adoption, Ryan was an exceptionally bright and talented individual; a lover of the sciences and even somewhat of an athlete at heart. For his entire school-time life, he had been an only child. However, that would change in October of 1998 when his parents gave birth to Cassandra, who would go on to become part of his inspiration. For Ryan, his new sister was his own child, one who he had an overwhelming desire to protect and care for. And this, for the most part, was the case; even while traveling down the route of marriage to his high school sweetheart, Natalie Locks, and making preparations for a child of his own while still studying at college under the United States Military's ROTC program.

After attending college for a bachelor's degree in Criminal Justice, Knox was already married to the love his life. Life moving quickly, his parental focus would be forced to change from his young adopted sister to a more reasonable individual; his own newborn daughter, Vanessa Knox. However, his initial time with her would be inevitably short. Under the military's ROTC program, Ryan was unfortunately brought into service by the United States Army, his athletic and mental skills qualifying him for a position in the Green Berets. Losing nearly all communications with his new family, he became increasingly more desperate to be with them once more.

Moving back and forth between the United States and several Middle Eastern countries as he participated in covert operations in the aftermath of the September 11th, 2001 attacks, tension began to rear its ugly head between the men and women of Lieutenant Knox's unit. Being without contact with his family for as long as months at a time had an effect on him, and he simply could not take it any longer. Which is why one night, while once again stationed in the United States after a successful raid on a Mujahideen compound, the stressed Lieutenant became engaged in a heated argument with his unit's commander, Captain Block. The argument ended in a brawl, with the victor being Ryan; unfortunately, in the process, he had unintentionally murdered his opponent. With no foreseeable way of getting out of this unscathed, he ran, able to slip away into the Virginia black night unnoticed. Now deemed a murderer and a traitor to the United States, he had little choice but to make an attempt at a new life.

Named after the two-headed dog and brother of Cerberus in Greek mythology, the name was picked specifically to reference Aaron's leadership even in times long gone for the organization. Though rarely used in combat due to his lack of necessity to enter it, the suit is still constantly upgraded with the latest in technological advancements in order to ensure its primary operator's absolute safety and efficiency on the battlefield.

The combat uniform is heavy, though it's certainly not the heaviest in Cerberus' armory. It can move with speed as well, the power for which being generated and expelled through a prototype exoskeleton below the primary armor, allowing Aaron to exercise his close quarters combat expertise. It also allows him to perform expertly despite his leg injury.

He has used the suit for years, though it remained unused in Motherbase Styx's armory for the years he had gone missing. 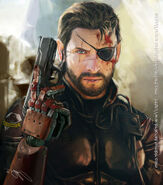 Another recent image of Aaron Spyker

A front view of Orthus, showing off several battle scars it obtained over the years

An image of Aaron Spyker in his later years as he ages
Add a photo to this gallery
Retrieved from "https://cerconrp.fandom.com/wiki/Aaron_Spyker?oldid=2011"
Community content is available under CC-BY-SA unless otherwise noted.