Blackjack was an Explosives Expert within the Cerberus Contracting Director’s Unit, and was the replacement for [REDACTED].

Jack stood at six feet, four inches tall. His hair was black and naturally untidy. Jack has a fair skin complexion and very few scars decorate his body. The man’s physical state was in top condition.

Due to a recent incident on his first mission with the DU, Jack has burn scarring starting on his left forearm and ending on his left shoulder blade and collar bone.

From a visual standpoint, it’s safe to say Jack is in his mid-twenties.

Most of Jack’s gear is modified to some degree to fit his needs.

Jack constructed this helmet once he found bare-bones plans for it that were left behind by Smith.

It is on par with the standard Pilot/Engineer CCU helmet in terms of protection. The outer layer and a section of the mid layer are made out of tungsten plating. The rest of the mid layer is a section of an impact absorbing material derived from Sorbothane for military use. It's sealed from the rest of the helmet by a light metal alloy to allow the inner workings of the helmet (HUD systems, Radio unit, etc.) to function. The inner layer is carbon fiber and extremely high quality and comfortable cushion to help absorb impacts the mid layer can't.

Jack had a one-way paint cover the initial layer of ceramic and then installed a second, unaltered piece. This visor allows the user to have more visibility than the traditional CCU Helmet without sacrificing protection.

The helmet features a custom HUD Jack had made. It has the ability to activate night vision, thermals, and a scan to identify possible threats. It can connect to the network to allow it the same functions as the previous CCU helmet, though it does not need to be connected to function.

Jack wears a modified Engineer CCU during combat operations. The CCU has a four suits emblem carved and painted on the shoulder plates.

The usual armor pieces has had lights removed or disabled and some excess metal removed. Shoulder plates, pouches, and forearm plates have been added.

The shin guards have been damaged and replaced with custom mud-boot like foot wear that connects to the new knee guards with several plates that cover the calves and shins. These plates can shift for movement of the feet and knee joints, without compromising protection or maneuverability as some tall mud-boots would.

The entire CCU remains solid black with some red paint for the four suits emblem.

Originally a carbine and now an smg, this firearm has been modified with a shorter barrel, aim-point scope, silencer, and converted with custom parts to fire 5.7x28mm ammunition with custom magazines. Very few of the original parts remain, though it’s still obviously a Scorpion. Only able to be repaired with parts directly from R&D. Jack’s most treasured possession.

This pair of handguns each have a silencer, custom grips, mini-dot sight, IR laser sights, and a metal cover. Easily replaced and repaired.

Custom Made Mossberg 590A1

When first searching the market for pump shotguns, Jack came across two almost perfect candidates. The Mossberg 590A1 and the Remington 870. He decided to have a custom Mossberg with the shorter barrel length of the 870, without sacrificing ammo capacity and firepower for maneuverability.

Where everything else Jack owns is modified to great degree(or completely custom-made), his Benelli M4 is almost stock. Jack and R&D have changed very few parts, within this beauty of a gun.

The gun Doe gifted to him when apologizing for almost killing Jack, alongside two magazines with seventeen of Doe's experimental White Phosphorus .45 caliber rounds. Matte grey with starburst explosion patterns etched into it, and Damascus engraving techniques.

"The feeding ramp is polished to a mirror sheen. The slide’s been reinforced. And the interlock with the frame is tightened for added precision. The sight system is original, too. The thumb safety is extended to make it easier on the finger. A long-type trigger with non-slip grooves. A ring hammer.The base of the trigger guard’s been filed down for a higher grip. And not only that, nearly every part of this gun has been expertly crafted and customized" -Note included with the package from Doe.

The breach loaded launcher that Jack made to add to Cerberus Contracting's Explosive Arsenal.

During his time with the U.S. Army and Cerberus, Jack obtained degrees and training in several fields.

“Blackjack” was born in Germany and frequently moved from there to the US and back. Once he graduated at the age of eighteen, he joined the US Army and began taking college classes around his schedule.

Having almost no time to relax would make life hard for Jack. He'd practically never be able to hang out with anyone, and the times he did never lasted long. Though he persevered. Jack would usually crack jokes in the worst possible times, which only lead to more work on KP or something similar.

Jack would make it to Lance Corporal and refuse any more promotions. He'd usually say something along the lines of. "I'm flattered that you think I can handle more responsibilities, but no thank you." or "That'd be against standard Army procedures. What are you talking about Lance? I'm not enough of an idiot, sir. Let him do it."

These comments earned him a demotion and later he would be ineligible for an NCO position.

Eventually, he got his degree/s in Engineering and went back to civilian life in Germany for a short time before joining Cerberus Contracting Co. to further progress his wallet. Plus they have some pretty sick health benefits. 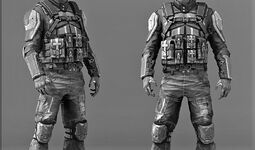 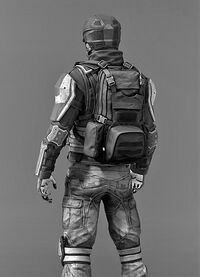 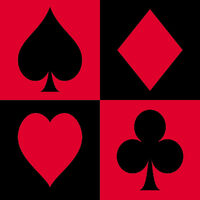 The emblem upon each of the CCU's shoulder plates. 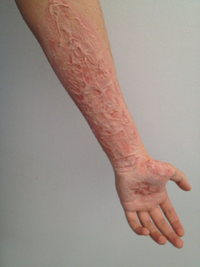 A good representation of Jack's scarring. Just without the wrist and hand burns, and they go up to his collarbone.
Add a photo to this gallery
Retrieved from "https://cerconrp.fandom.com/wiki/Blackjack?oldid=1798"
Community content is available under CC-BY-SA unless otherwise noted.