Devices used by the Cerberus Contracting DU, and created by it's Explosives Expert.

Description: Explosive Pack contains a large C12 block, connected to an arming handle, and a keypad. From here, the detonation code and countdown timer can be set and authorized. Once the code has been verified, the charging handle can then be rotated to its "armed" position. Once in the armed position, an arming signal is sent to the other explosives within range. The third component is the wireless card, which will locate and connect to a verified terminal or heads up display and wait to receive the detonation signal.

Description: Thrown spherical metal device with a switch ready to be set to several settings.

Description: Designed for a quieter insertion than other, more explosive charges yield. Consists of a long wire of a thermite-carbon alloy, with a charge used to ignite it. Once the charge is activated, a large amount of heat is released, which is capable of extreme amounts of anti-material damage, melting through solid metal.

Description: Breach loaded launcher with an aiming module that can connect to a user's HUD.

Ammunition: The launcher can use any standard 40mm grenade, along with the three rounds Jack designed for it. 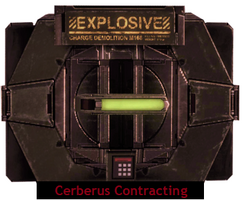 Picture of a CC-168 Demolition Charge 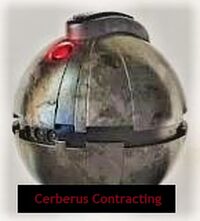 Picture of a TDD-001 Thermal Detonated Device
Add a photo to this gallery
Retrieved from "https://cerconrp.fandom.com/wiki/Cerberus_Contracting_Explosive_Devices?oldid=1761"
Community content is available under CC-BY-SA unless otherwise noted.